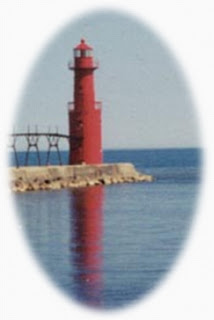 By far the most beautiful beach on Lake Michigan's western shore is Algoma's Crescent Beach, an opinion that is not merely a figment of home-town pride. Long before Wisconsin became a state, and even before its territorial status, the beauty of the area astonished Joseph McCormick and the party of men that sailed north with him from Manitowoc . They’d heard about the place from area Pottawatomie. At the time  McCormick felt the bluff on the north side of the (now) Ahnapee River would be a most desirous and scenic place on which to start a town, something the Pottawatomie villagers knew long before McCormick’s 1834 trip. The bluff that provided spectacular views for the Pottawatomie villagers also provided them a measure of protection and safety. 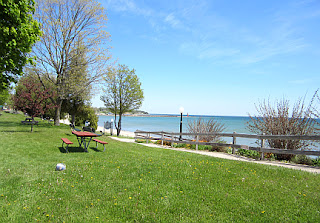 Today’s Crescent Beach was a camping spot and resting point for the Indian people who paddled from the north to and from their Black Earth planting grounds on the East Twin River between today’s Mishicot and Tisch Mills. It was a place to gather, rest, celebrate and feast. Any summer’s day, one sees numbers of people gathering, sunning, picnicking, walking the boardwalk, playing beach volleyball, enjoying the crashing waves or perhaps wading into a quiet rippling lake. Some things don’t change.

It is no secret that what is now Crescent Beach was an area covered with wild flowers, perhaps including sand roses which would have thrived in the morning dews. In the last 100 years or so, the name “Algoma” came to be thought of as an Indian word meaning “Park of Flowers.” It is far from the truth, although understanding the corruption is easy. Wild flowers were there on the lake bank while an early resident George Rosier – to some ears sounding like Rosey - lived in the area that is now the southwest corner of Jefferson and Lake Streets. By 1880 Rosier Park could be found along Jefferson. When residents were going to “Rosey’s place,” it eventually became synonymous with the beach. The rest became a passed on historical inaccuracy. In truth, Algoma is really an Algonquin word meaning “where waters meet.”

One hundred years later, it is almost frightening to know just how close the city’s lake shore came to being “developed.” Early residents knew the area was a place of beauty. Cooling summer breezes touted by the school district as good for summer school also brought those wishing to flee city heat. In the years to come, there were summers when Ahnapee/Algoma families rented rooms to those escaping that heat. At one point rooms were rented at the old Normal School dormitory, though by then the bluff was preserved.

It was in 1911 when the Algoma Record suggested the creation of a park association tasked with laying out a new park along the lake on land owned by John Hilton. Editor Frank Elliott felt the beach was the finest on the western shore of Lake Michigan though it lacked a bathing house. That meant little advantage could taken of the marvelous resource.* The paper felt the beach was sure to attract young bathers on warm summer nights if it had such a pavilion. At the time, the city lacked a place for young adults to enjoy themselves, and Hilton’s plan to lease the property cheaply sweetened the idea.

Campers used what many called “the camp site,” and by 1923 Mayor McGown felt the place needed an attractive name such as “Lakeside Park.” He felt “Lakeside Drive” would be a good name for the road, as he envisioned the day when motorists would pass the park on their way north, rather than using Highway 17. Area drivers preferred the lake shore route from Kewaunee and it was only a matter of time before the highway was rerouted.  McGowan felt the view of the lake from the bluff thrilled those who were not accustomed to such beauty. McGowan was right! And that was even before  Algoma's iconic red lighthouse was built in the mid-1930s. Jag Haegele was always quick to remind folks that it was Wisconsin’s 4th most photographed spot.

It was during the alphabet soup days of the FDR’s administration when WPA was alive and well that things changed.

Eighth District Congressman George Schneider announced in August 1938 that the City of Algoma received approval funding in excess of $36,000 for park and beach improvements. Such funding meant beautification with clean-ups, tree and shrub planting, installation of toilets, a bath house, a camp house, swimming, diving and life-saving apparatus. It meant ball fields and playground equipment at Perry Field and a few other public works projects..

During 1939 a huge retaining wall was built at the north end of the beach near the foot of Fremont Street.  Then the beach  to the south was divided into plots offering sand areas and areas to be seeded with grass and covered with evergreens to provide both shade and beauty.  A stone stairway was built on the south end of the park while steps were built in the middle and a lane, running from the top of the bluff to the beach,  was built on the north end. An asphalt sidewalk was laid at the foot of the lake bank.

Another retaining wall was built thus connecting to the first abutment. The second was a shorter stone and mortar wall at the base of the bluff, supporting the sand and earth being leveled off in a slope from the lake bank. Both walls would serve to protect the bank from heavy waves. Truckloads of ground were dumped on the bank in the beautification effort.  Varying sized sand and grass plots were as long as 100’ as plans included an effort to use as much natural sand as possible.  A bathhouse at about the site of today’s Welcome Center was also in the plans, but it was not built. 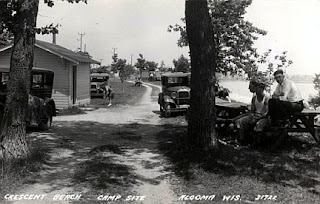 WPA did build a camp house, or kitchen, at the south end of the park. Stocked with kitchen ware, the camp house was open to those travelers who wanted to make a meal. It didn't take long before city businessmen joined forces to install, and pay for, a telephone in the building.

WPA crews had other projects in Algoma. When the weather changed, they dug a sewer from Steele St. past the Utility Plant to the point behind the Dug-Out where a bathhouse was to be built. At the time, the Utility was still dumping sewage into the lake but the new sewer was going to eliminate that.

Nearly 80 years later Algoma has forgotten what WPA did for the community. Few have any idea that WPA was the impetus for the jewels that exist today. A tribute to the workmanship of nearly 80 years ago is a source of community pride. It remains today but is something few have seen. 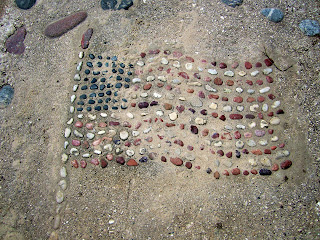 In November 1939 workmen were putting the final touches on the stone wall that ran the length of much of the beach. They were still planting and seeding and installing the stairway at the south end of the beach. On the final step on the stairway is this flag made with colored beach stones set in concrete long before Hawaii and Alaska achieved statehood. Standing sentinel are the stone posts at the top of the bluff marking the stairway that continues telling the story of Crescent Beach. Algoma residents H. Nell and C. Steinhagen have been cleaning the flag for years. Hats off to them too. 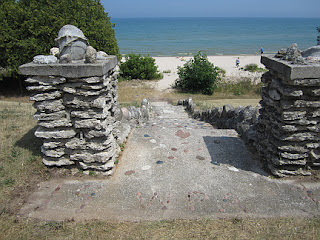 The postcard was sent in the early 1940s and its picture was taken about the same time. The kitchen is the white building on the left. The parked cars could access the park via the road going through it. It was in that area that campers set up tents until into the '40s. The road was eliminated with highway widening and improvements. Those visiting this beautiful area are free to park along the curb. One can walk the sand or the boardwalk to the far northern end of the beach where there are two piers on which the public can walk, cast a fishing line or photograph the lighthouse. Should one want a lake fishing charter, a stop at the Visitors' Center will provide contact information.

*A bathhouse was erected east of the Van Camp Cannery (now the Dug-Out) during July 1918.

Sources: Ahnapee Record and Algoma Record Herald; An-An-api-sebe: Where is the River?, c. 2001; Photos were taken by the blogger and the postcard is in the blogger's collection.
Posted by HistoryLady1 at 2:26 PM